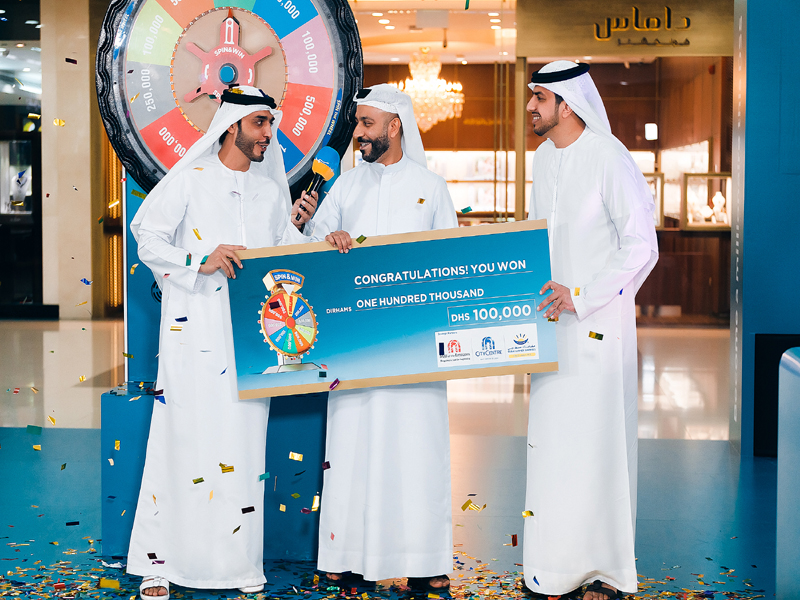 More than 100 shoppers at Mall of the Emirates, City Centre Deira and City Centre Mirdif win whopping AED 557,500 worth prizes in exclusive ‘Spin the Wheel’ opportunity this DSS

Mega prize was awarded at City Centre Deira on July 28

Majid Al Futtaim—the leading shopping mall, communities, retail and leisure pioneer across the Middle East, Africa and Asia, created great moments for lucky shoppers during Dubai Summer Surprises this year by awarding AED 557,500 worth of prizes in its exclusive ‘Spin the Wheel’ opportunity at Mall of the Emirates, City Centre Mirdif and City Centre Deira.

The malls exclusively collaborated with the Dubai Festivals and Retail Establishment to give shoppers a chance to win instantly this DSS.

More than 100 visitors at the malls won prizes over three weeks by spinning the specially designed raffle wheel. One lucky UAE resident walked away with a whopping AED 100,000 prize by spinning the wheel on July 28, the final day of the campaign.

Five shoppers were selected daily for a chance to spin the wheel during this period. The first set of shoppers had their opportunity at Mall of the Emirates from July 9 to 15, followed by City Centre Mirdif from July 16 to 21 and then at City Centre Deira for the final week and finale on July 28.